The mission of Africa Alive Dance Company is to preserve the heritage orally translated in a sense of promoting the human experience through dance, music and storytelling and to connect deeply to tradition and history through movement and music expressing the life of the community and liberation.

Founded by Jason Aryeh in 2010 and based in Ghana, West Africa. Africa Alive, a dance company that focuses on the integration of the traditional West African dance forms/styles with contemporary choreography. Through movements, Africa Alive presents a unique vision of human struggles and conquest. Aryeh uses movements as a way to emphasize the importance of community in West African Culture and to inform the audiences with the beauty of traditional forms/styles and rhythms. He is an activist for the development of West African dance community and is instrumental in encouraging young dancers to develop careers in dance.


A West African traditional dance form becomes contemporary when they are taken from its original setting in the community and from the people it belongs to, brought to the urban areas and undergoes a transition of numerous influences as it’s re-choreographed for stage.

His goal is to strive to define simplicity and clarity without extraneous movement, superfluous energy or unwanted tension that would interfere with the original intent but understanding the body as an instrument of communication and expression that could “speak”. 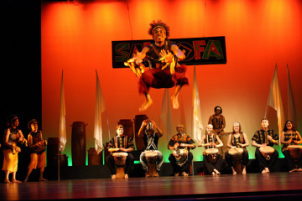 Jason Kingsley Nii Ayikwei Aryeh has been dancing and making dances since Primary school. Growing up on the shores of Accra-Ghana, and a native from the Ga tribe, Aryeh studied under the wings of many West African traditional dance teachers/professors at the Department of Dance Studies, University of Ghana where he performed on dance productions and on stage and some communities. He extensively studied with many modern dance professors including Bill Evans, adopting the Bill Evans technique and Clyde Morgan whose technique includes a combination of Hose Limon. Gathering these experienced in the dance world, Aryeh utilizes the concept of polyrhythm as well as total body articulation, travelling and interacting through space. His goal is to strive to define simplicity and clarity without extraneous movement, superfluous energy or unwanted tension that would interfere with the original intent but understanding the body as an instrument of communication and expression that could “speak”.

Aryeh’s movement derives from his interpretation of the human condition in life’s journey and he relates to several cultural ritual sources. These sources include tradition, history, dance movements from the numerous tribes existing in West Africa combined with storytelling, modern and contemporary/urban dance movements. His movement expresses traditional themes of ritual, community and the human collective experience this journey of life.